Thoub is a cultural custom of Qatar. Men are wearing the thoub to indicate their cultural believes. It is worn by Qatari men to honor their culture.
During the summer time, the men wear a long thoub, cut along the lines of a shirt which reaches to the ground. It is a matter of their pride that their thoubs are perfectly clean & ironed. And men will have their clothes taylor-made, from choosing fabrics in different shades of white, of fibres on weaves. They get to choose the shape of the collar, the buttons & the cuffs. 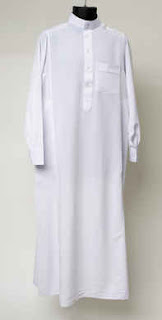 Nowadays many young men (shabaab) will select a style to suit their taste. The thoub is worn over long white cotton trousers, or boxer style-shorts. During in the winter months, the style of thoub does not change, but the weight of the fabric increases, greys, brown, & blacks make their appearance. To cover their heads young Qatari boys (shabaab) wear an embroided cap called a gahfeya. 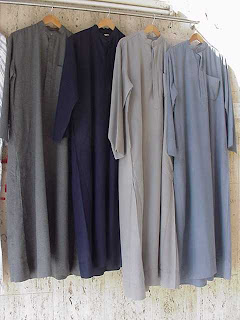 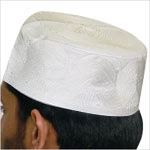 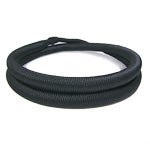 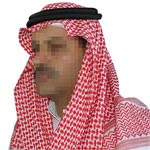 At first they cover that with a folded square cloth, the ghutra. They can wear on special occasions or on a daily basis. In the summer months, often red & white or black& white. In the winter sometimes creamy cashmere, the ghutra is held in place with double black coil, the iqal-sometimes with one or two cords and tassels-which the Bedouin used to tic their camels at night, the loops being pulled over the camel's knee to bend one leg & prevent it moving fast. 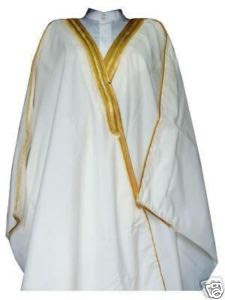 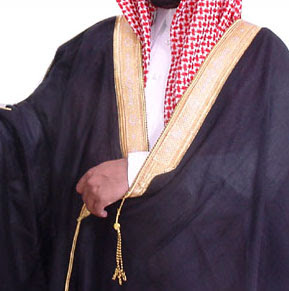 For ceremonial occasions, the black-gold edge cloak, the bisht. It does not have buttons. To greet someone they keep one arm in the bisht and the other free to shake hands. In winter months they used to use a heavy camel hair or wool cloak, the fahrwa, often lined with lambswool was worn in cooler weather, it would be placed by a fleece or wool sleeveless waistcoat. Now a days it is more common to see a western-style hunting jacket. 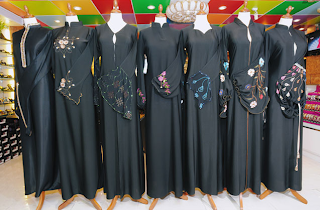 Older women follow their tradition, by wearing a long dress or djelabia, often cotton. They cover themselves by a black cloak called abbayah made from silk, cotton, or a silk cotton mix. The djelabia is embroidered at the neck and cuffs or sometimes, short sleeves. They used to wear under the djelabia baggy ankle-length trousers called sirwal,heavily embroidered around the ankle cuff. The the djelabia is still preferred dress of elderly woman, has been replaced for the younger generation by more western clothes. Based on my experience when Im running errands I sometimes like to wear the djelabia because its light weight & comfortable during the hot weather. My friends react when I wear djelabia. They said "what are you wearing?" or "why don't you wear pants?' I find that wierd beacause it is our tradition. I find it shameful when people don't embrace their culture. Qatari women
cover their hair with a scarf the shaila sometimes decorated under a head-to-toe abbaya. 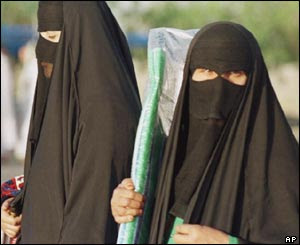 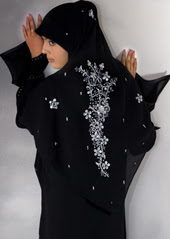 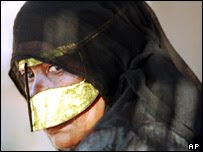 Thus the older more traditional women use as short nose or chin-length musk, the battula, the younger women, if veiled usually choose a Bedoin style chest-length veil, the hijab which just leaves their eyes exposed. Although the masks are made of calico, they are dyed with indigo, & beaten, giving them a metallic appearance. Young, girls in garangarou wear the bukhong, a lightweight black head covering which is chest length at the back, heavily embroidered with gold or silver thread around the face & down the center front panel. Today Qatari women follow fashion and to western designers fashions. 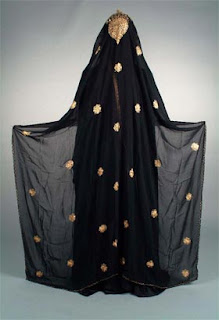 Traditionally embroidery for women decorated & pattern Thobe A Nashal, a over dress of light weight chiffon stiched from vertical and horizontal panels to create a ‘T’ shaped dress when laid flat. The embroidered Thobe Al Nashal used to be worn by Qatari brides. The ladies only celebrate in the bride’s home-henna night –is part of the wedding ritual for a Qatari bride. Beautiful patterns in henna are applied to the hands, arms, feet & ankles of the bride & those who are closest to her can also take turns to apply the henna. 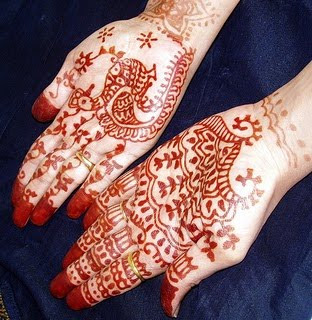 Nowadays, many of the dresses are produced, free hand machine embroidery bein, used for gold & silver threadwork, but with pearls beads & sequins or metallic pieces added by hand. The neckline is also decorated. 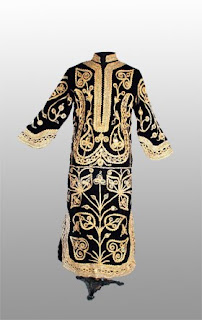 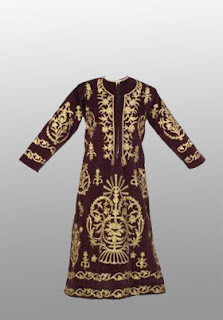 Weddings, family celebrations bring out beautiful gold jewelry such as hairpieces, necklaces, bracelets & pendants. It is designed not only for their elegance but in some cases for bringing good fortune. 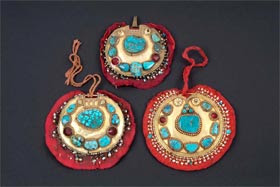 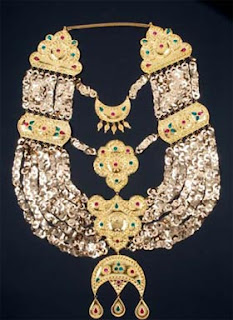 MY CULTURE
Qatar is a small country. According to my research I have seen a lot of cultural change in Qatar. The country has achieved the transformation with a unique blend of traditional and modern reflected in everything from its architecture to the lifestyle of its people. 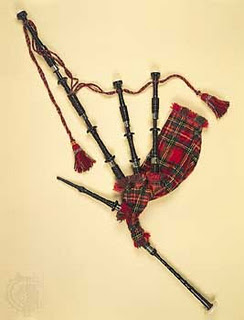 Scottland has influenced in a form of bagpipe into the cheerful ceremonial face of Doha's musically inclined police the brass band makes for admirable public relations for the forces of law and brings in recruits. 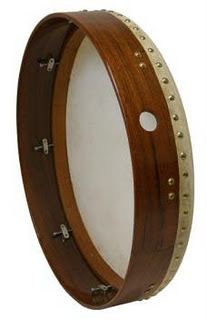 During festival time at Eid, anniversaries & National Day (September 3) the people gather up to enjoy the cheerful communal displays. The bagpipe band of the police will march through the street, or a military brass band.

The ardha is a traditional dance that symbolizes strength & vitality.

The ardha is a traditional dance that symbolizes strength & vitality.

The ardha performance by men with swords & sticks, drumming & piping.
The ardha is the most popular dances. It is performed mostly at weddings & celebrations. Its seen ad a strong dance which is a displays of unity and strength, the Ardha can be seen on Eid holidays on National Day- which starts on September 3 & on special occasions such as the anniversary of Emir Succession.


The ardha performance by men with swords & sticks, drumming & piping.
The ardha is the most popular dances. It is performed mostly at weddings & celebrations. Its seen ad a strong dance which is a displays of unity and strength, the Ardha can be seen on Eid holidays on National Day- which starts on September 3 & on special occasions such as the anniversary of Emir Succession.

The traditional music in Qatar falls into two categories -songs connecting to the sea & song connecting to the desert life. Clapping & drums plays an important part. The traditional drum is the tabl, an oval drum with skins at either end, suspended from a strap around the players neck, & beaten with a short stick. Today they use the tar, a large tamborine -style instrument not originally taken to sea. The tars note is usually adjusted by warming it in front of the can fire. This instrument is commonly seen at weddings & other celebrations. Last but not least there is a small double skinned drum, not much longer than a mans hand called, a murwas, which requires much physical movements to play well.


Woman's dance, Khanmary is performed by a group of masked women at a wedding.


Modern interpretation of old songs does not only feature percussion, but strings, in form of the oud. 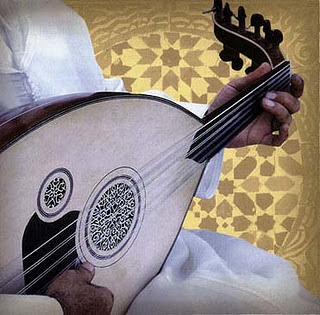 Garangarou is a festival during Ramadan which is celebrated by young people. Who walk around the neighborhood & gather candy. So, its kind of like Halloween but, minus the customs. The kids wear traditional clothing. 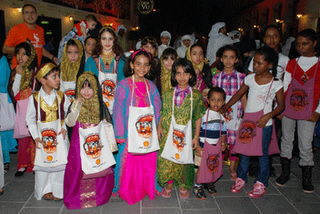 Ramadan is a religious month which 30 days. It is an Islamic daylight hours is prohibited smoking, eating, & drinking. It depends on the moon. Muslims believe that Ramadan is a month of serving God to humankind, the Qur'an is were revealed to the prophet Mohammad.
Posted by Alanoud at 3:46 PM