Miss Congeniality movie revolves around the FBI agent Gracie Harts who works undercover as Miss New Jersey with her team to protect the Miss United States Beauty Pageant from a possible terrorist attack.

Throughout the movie we can see a huge transformation in Gracie’s identity. At the very beginning Gracie seems to be very masculine in both her looks and her behavior. She doesn’t wear any make-up, doesn’t do her eyebrows, she doesn’t even brush her hair. Moreover, she is aggressive in everything she does, including eating, walking, and laughing. One of the ladies she meets at a bar asks her if the FBI forces all women over there to wear these “really masculine shoes”, and Gracie clarifies that its not the FBI, its her own personal choice. Moreover, her beauty pageant consultant for the mission, Victor Melling, compared her walk to the walk of the dinosaurs in Jurassic Park.

Gracie faces a hard time accepting her new assignment to work undercover as Miss New Jersey in the pageant. She gets a new look that shocks her colleagues, where she starts to look more feminine to others. We can also see through the film how Gracie starts to socialize and learn the norms of this new culture she has to fit in. She takes the instructions from her adviser and watches video clips of beauty pageants and starts imitating the moves of the contestants.

At this stage Gracie’s front stage behavior is in the pageant trying to act more feminine, and her backstage behavior is with her team where she can act masculine, as she’s used to. However, as the time passes and through her interaction with the other girls in the pageant, Gracie seems to absorb more of these norms and attitudes and become more feminine overall, while maintaining some aspects of her original masculine identity, like power and independence. 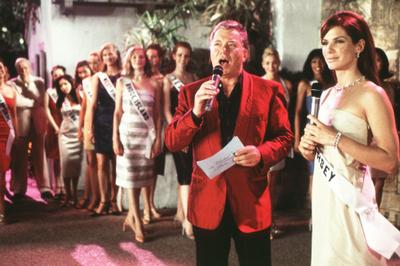 Her transformation gets her the guy, her FBI colleague Eric Matthews, after she had really low chances in finding any guy who would be interested in her. This shows us how society as a social force puts a lot of pressure on individuals shaping their identities in order to have some of the things we desire, like a partner, which would be considered as positive sanctions for following the norms of the society for how we look and how we behave.